1) You don’t need to break the bank on an extravagant all inclusive on the other side of the World.

I would never, ever turn down a lavish, luxury trip somewhere. But unfortunately it’s just not always that affordable. My mum was bringing up two kids on her own and so couldn’t afford a lot of the holidays that kids in my class would go on. She never let that get her down though; we saw all the corners of the UK, driving to a new place whenever we got the chance.

From Whipsnade Zoo to Stonehenge. From the Brecon Beacons to Devon; we were constantly going on trips and having the best time staying in Travel lodges and driving. This taught me that money doesn’t have to stop you from having adventures and going to new places. Trips can be short and spontaneous, and you don’t have to go chucking all of your money at a trip to have a great holiday.

2) But sometimes you deserve to splash out on something more expensive than you would normally pay.

Anyone that knows me would probably call me a cheapskate. I don’t like paying over the odds for things when I don’t have to. I will use hip flasks where I can to save on drink money, I would rather sit on a coach for an entire day than spend stupid money on train prices. I like finding short cuts when it comes to spending money, and I like using them even more.

As much as I want to save as much money as I can so that I can do more things, I learnt from an early age that sometimes you need to stop and spend a bit more on yourself so that you really enjoy the moment. Not always, but sometimes.

3) There will always be somewhere in the world that captures your heart forever.

When I was younger my mum used to talk about a holiday she had in Malta all the time. Whenever she mentioned the Island her eyes would light up and she would re-live it as she told you about her trip there. I realised then that a part of Malta would always live in my Mum and that she was always going to dream of going back there whenever she could. I learnt and hoped that the same thing would happen to me with a place some day, and it was both a great experience, and a terrible one having it happen to me.

See, the thing about having a place steal a piece of your heart is that you never feel completely the same away from it. You think of that place frequently, and most days you will find yourself wishing you were there instead of wherever you are, and places have a rough time trying to compare to that perfect place in your mind. Having said all that; finding a place that feels like it could be your home on any day, and no matter how long you spend away from it, you know it will welcome you will open arms and be just as wonderful as the last time you were there is a bloody great feeling too.

The epic romances that I have grown up reading about between two people happen to me all the time too, but rather than meeting the man of my dreams, I meet the Country, City, Town & Village of my dreams; and I have my mum to thank for that. Suck it Nicholas Sparks!

4) Getting lost can be the best adventure. 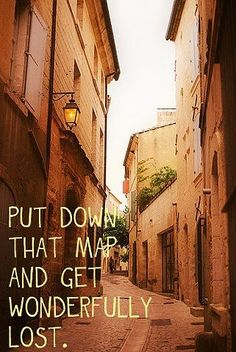 If I say that we need to go left for 100 metres, then they will automatically start heading 100 metres to the right. My sense of direction is the worst I have ever known and I spend most of my time lost somewhere trying to work out the right way to go.

Although this can be annoying for a lot of people when we are in a rush to get somewhere; I absolutely adore being lost. When I was a kid we used to jump in the car and my Mum would get my brother and I to tell her directions until we were completely lost and could get out of the car and explore somewhere new. That has stayed with me as one of my favourite ways to see somewhere.

5) It’s never too late for you to travel.

My Mum started finding her travel feet after my brother and I had grown up. One day she plans to drive as far as she can in an SUV with the dog which I think is pretty bad ass.

You can never miss the boat with travelling and I’m glad she taught me that.

6) When all else fails, travel alone. 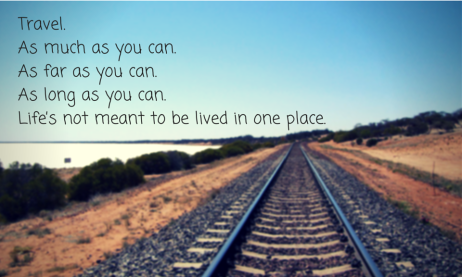 Her friends not being able to join her have never stopped her from going on a trip that she really wants to go on. She’s just done it alone and befriended people to have dinners and sightsee with out there. YES MUM!

7) Travel experiences can be had at home if you’re able to look at things with fresh eyes.

When I was a Kid she would get a disposable camera and take us out for the day somewhere in London. She would be just as excited as all the other tourists who were experiencing London for the first time; even though we lived there.

We would play games to see how many new places we could find. Whether it was a Museum or a park or even spotting something we hadn’t seen before in a place we had been countless times. Being home from travels for a while doesn’t mean that sightseeing and adventures have to stop.

So thanks Mum, here’s to seeing more of the World together!

1 response to 7 Things My Mum Taught Me About Travel